I have been fishing for over 50 years and consider myself a C4 fisherman, in that I fish for whatever I Can, whenever I Can, wherever I Can, and however I Can. Given a choice, I usually choose a fly rod. I grew up in Great Falls, Montana. Growing a Montanan, I was immersed in an outdoors culture. I learned to fish about the time I learned to walk and to hunt not long after that. I began to tie flies at age six, and was tying commercially by the time I was eight. As a teenager, I worked summers in a tackle store and winters in a taxidermy studio. I spent one summer as a custom fly rod builder’s apprentice. After high school, I enlisted in the Navy in 1985. At the time, it was join the service or become a trout bum. Though I took the high ground and remain on active duty, I sometimes wonder how the trout bum plan would have worked out. My career in the Navy has allowed me to fish on six continents and catch dozens of species of fish, mostly on a fly rod. I served in Iraq in 2005 where I founded the Baghdad Angler’s Club and School of Fly Fishing. I wrote the book, A Fly Rod in My Sea Bag, about my time in Iraq and the club I started up to support service men and women far from home. I have spent 37 years in uniform, 25 of those years at sea or deployed, including command of the amphibious dock landing ship, USS ANCHORAGE (LPD 23) and MPSRON TWO. I am a proud Ambassador of Temple Fork Outfitters and only fish with TFO rods – Power to the Angler. I am currently stationed in San Diego. I support Project Healing Waters Fly Fishing Programs at every opportunity.

ORDER A COPY OF A FLY ROD IN MY SEA BAG 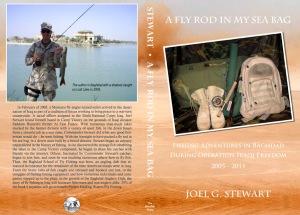